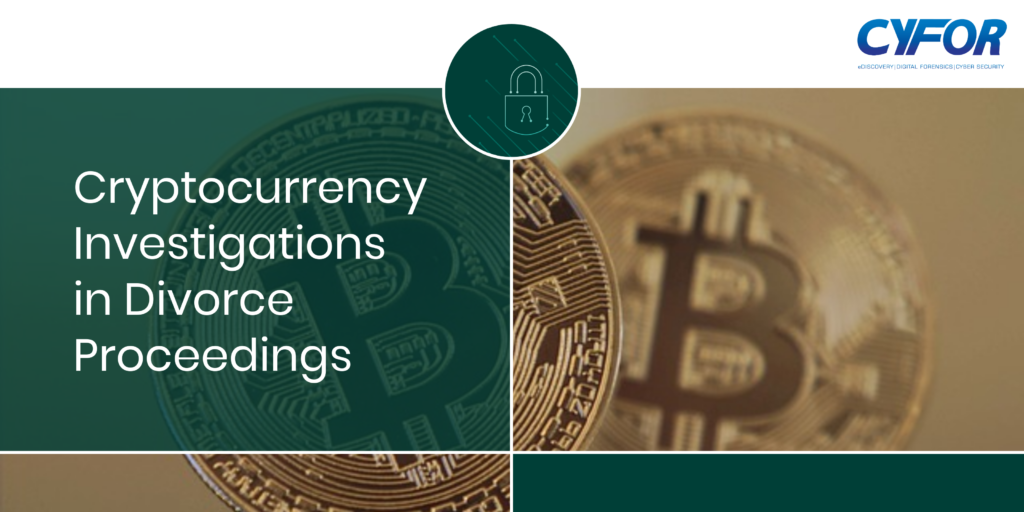 Cryptocurrency investigations in divorce proceedings are becoming a common occurrence as cryptocurrencies, such as Bitcoin, rise in popularity and separating partners attempt to conceal their high net worth (HNW).

Cryptocurrency is a virtual currency that has garnered mainstream attention since Bitcoin, the first and most popular form of cryptocurrency, was first created in 2009. As a solely digital asset, the technology uses encryption techniques to secure transactions, making them difficult to counterfeit. Transactions are encrypted and recorded on a “blockchain”. This is an encrypted ledger detailing transactions that cannot be altered and are based on a mathematical algorithm.

Cryptocurrencies are largely unregulated and utilize peer-to-peer, decentralized networks for transactions so there is no third-party bank that the currency must go through. This allows users to send cryptocurrency directly to another person while maintaining a high level of pseudo-anonymity as bank verification details are not required. Cryptocurrencies can also be moved offline to a hardware wallet that functions like an encrypted USB device. These elements make cryptocurrency desirable as a form of exchange.

How is cryptocurrency relevant to divorce proceedings?

Just like other assets acquired by spouses during marriage, such as property or finances, cryptocurrency is an asset which the court has the power to distribute within divorce proceedings. Both parties are required to provide full disclosure of all assets at the outset of proceedings. However, there are always parties who attempt to hide their assets from the courts. This is where cryptocurrencies become more prevalent.

With the rising popularity of cryptocurrencies, more spouses in divorce proceedings are likely to own them, as they may see the technology as a means of hiding their assets from the opposing party. Courts are aware of this common practice within contentious divorce proceedings and have the relevant powers to deal with such matters, including cryptocurrency investigations. Unfortunately, as this is a relatively new technology, the challenge is that cryptocurrencies are difficult to trace and value.

If cryptocurrency hasn’t been disclosed during proceedings and the opposing party denies having cryptocurrencies, then a search needs to be made in order to establish any such existence or ownership. A review of financial statements can reveal evidence of deposits or withdrawals from an online exchange bought with funds from an associated credit card or bank account.

If financial statements do not reveal transactions with a cryptocurrency exchange, then the court can order the instruction of a digital forensic specialist to search relevant computers. This is with the intention of identifying evidence of cyber-currency transactions in files, emails or browser histories.

However, this type of search and seizure order is only granted based on sufficient evidence (such as an initial transaction identified in financial statements) to support the belief that cryptocurrency assets haven’t been disclosed. If cryptocurrencies are moved offline, such as the transfer of a digital wallet onto a USB stick, tracing becomes virtually impossible.

Even if a party’s digital currencies are identified, there is the challenge of accurately valuating them. This is not as straight forward as valuing normal investments like cryptocurrencies and the blockchain networks that generate them are not companies, they don’t have cash flows and there not stocks that can be evaluated by share prices.

Their value is based upon three factors: Utility, Scarcity and Perceived Value.

Individuals will only hold cryptocurrency coins if they are incentivized to do so. A coin with a strong and valid function will achieve this, as coin’s utility is correlated with its value. The more people that develop applications and perform transactions, the greater the demand, which will in turn push prices up.

Scarcity is a unique aspect of cryptocurrency that refers to the restrictive nature of coins. In economics, scarcity and rarity drive the value of an item, increasing its value in the long term, as there is only a limited supply of coins in circulation. An example of this is Bitcoin, as the maximum supply for this currency is fixed at 21 million coins.

Perceived value drives the relative value of cryptocurrency and is only as valuable as what the markets deem it to be. Bitcoin is viewed by many as the primary cryptocurrency, often generating extensive interest among the public.

View our Cryptocurrency Investigation Services
Back to all Posts